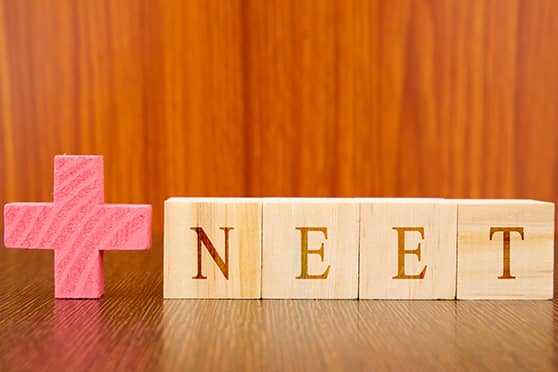 NEET is a national level pre-medical entrance test for students who wish to pursue medical studies in government and private institutions. source : Shutterstock

Advertisement
Summary
24-year-old Rahul Das from Assam’s Bajali district ranks 12,068th in NEET exam, gets through AIIMS with SC and PWD certificates
Assam chief minister Himanta Biswa Sarma announces that all his education expenses will be borne by the state government

Rahul Das from Assam’s Bajali district ranked 12,068th in the NEET exam. He has a burn injury on one of his hands, and said that his Scheduled Caste (SC) and Person with Disabilities (PWD) certificates helped him get through AIIMS.

It was no mean task juggling studies and serving tea to customers at the shop run by his mother. “I have seen my mother toil hard for us. We couldn’t afford a helper at the shop. Since school, I made it a point to help her in some way or the other…. I made tea and sold it, too. And as and when it was possible, I would sit down to study at the shop,” he explained.

Das and his brother were single-handedly raised by their mother, who was abandoned by her husband some 11 years ago. Poverty forced Das to quit his studies after Class XII, but he did not give up on the dream to become a doctor. Das said he would find time to study in between serving customers at his mother’s shop in Patacharkuchi Chowk area of the district.

In 2015, he had cleared the higher secondary examination, but left his studies for want of money. However, his zeal for higher education prompted Das to join the Central Institute of Petrochemicals Engineering & Technology (CIPET) two years later to pursue a diploma in plastic engineering.

Das passed with a distinction (85% marks) after three years and started work at a multinational company in Guwahati as a quality engineer in October 2020, in the thick of the COVID-19 pandemic.

“There was no job satisfaction at all... I always wanted to be a doctor. One of my cousins is a dental surgeon and he was my inspiration. I decided to leave my job and begin preparations for NEET with whatever resources that were available online as I had no money to buy books,” he said as customers lined up outside his shop to have a cup of piping hot tea.

The 24-year-old expressed gratitude to all those who helped him financially or by other means during the family’s hour of need. “Maa’s shop sits on land owned by Mantu Kumar Sharma, who has a big hardware shop at Patacharkuchi Chowk. But he never took rent from us. In fact, he has now booked my tickets to Delhi,” he said.

Das added, “We reside on the campus surrounding district deputy commissioner Bharat Bhushan Devchoudhury’s residence. He has helped us in several ways. Assam minister Ranjeet Kumar Dass visited our shop two days ago and handed over Rs 10,000 to me for immediate needs.”

Devchoudhury, on his part, said that the family lives on the campus of his ancestral home in Patacharkuchi, and he never charged rent for it. “We are very proud of Rahul because he is the first from Bajali district to get a seat at AIIMS, New Delhi,” the deputy commissioner said.

Assam chief minister Himanta Biswa Sarma had announced on February 4 that all education expenses of Das will be borne by the state government, Devchowdhury added.

Das is looking forward to a bright future in the national capital, where he would be spending the next few years pursuing medical education. His session is set to begin from June.