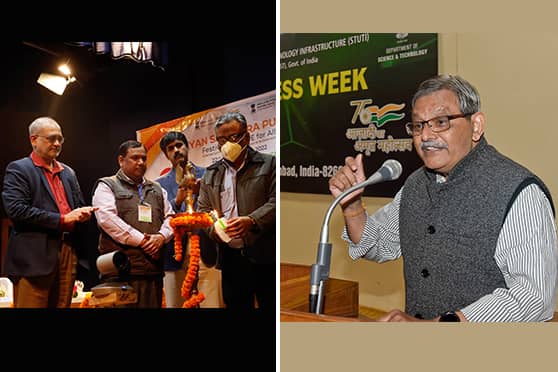 The Department of Science & Technology (DST), Government of India, has assigned IIT(ISM) Dhanbad the responsibility to build human resources and its knowledge capacity using open access science and technology infrastructure through the Synergistic Training programme Utilising the Scientific and Technological Infrastructure (STUTI).

R.N. Mukherjee, visiting professor, chemistry department, IIT(ISM) Dhanbad, delivered a special lecture on the basics and evolution of science. He has also served as director, Indian Institute of Science Education and Research (IISER), Calcutta, and head of the chemistry department at IIT Kanpur.

Mukherjee’s lecture was about the great personalities and Nobel laureates who contributed to the development of modern science and technology. He spoke about their journey and shared some lesser-known facts of their lives.

The students visited different laboratories, 3D Printing/Fabrication and Geological Museum after the inaugural programme. Refreshments and lunch was served and each student received a welcome kit, pamphlets on laboratories, museums, and memorabilia.

Utpal Baul, who the dean of alumni relations at BIT Mesra, explained how the institution has progressed in the field of science over the past 25 years.

C. Jeganathan, dean of research, innovation, and entrepreneurship, spoke about the significant research contributions, patents, and innovations by the institution over the years. He also mentioned the future entrepreneurship aspirations and research opportunities made available to the students and start-ups created by students of BIT Mesra like All Pinks Baby, Next Wave and Floxus. Research contributions during the pandemic, encryption techniques, vegetation and climate change received special mention.

Jeganathan also spoke about recent changes such as student funds for projects to promote innovation in technological fields.

Jharkhand Governor and chancellor of BIT Mesra, Ramesh Bais, joined the programme virtually. He stressed on the rich cultural and civilisational heritage of the state in wildlife, forest, natural sceneries, handicrafts, classical music, folk dances and mining industries. He also laid stress on the rich coal reserves that the state has for power and energy production.

Governor Bais also spoke about the eminent institutions of Jharkhand such as BIT Mesra; IIT (ISM) Dhanbad; Birsa Institute of Technology, Sindri; and National Institute of Foundry and Forge Technology. He mentioned the contributions of important scientific and technological organisations of the country.