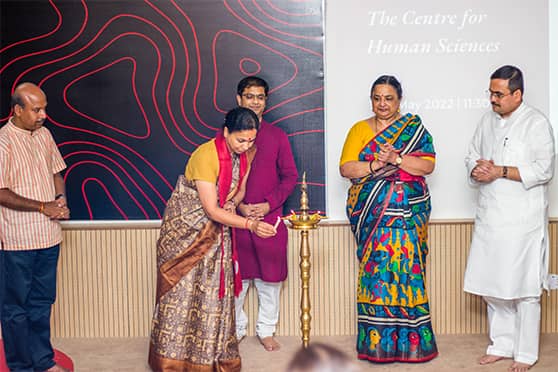 A dedicated website for the centre was also launched at the inauguration. Source: Rishihood University

Sonipat-based Rishihood University has inaugurated a Centre for Human Sciences on the university campus to spread the teachings of Sri Aurobindo, Rabindranath Tagore and Swami Vivekananda for resolving present-day issues, the varsity said in a statement.

The centre also aims to promote academic engagement on the Indian knowledge system and knowledge contained within the Sanskrit language, it added.

The head of the centre, Sampadananda Mishra highlighted the centre’s vision and focus areas. Shobhit Mathur, vice-chancellor of the university, spoke about the university’s goals and how the new centre would carry forward its mission of producing modern rishis.

Mishra, in his opening remarks, said, “Sri Aurobindo is somewhere missing in academia. There’s a great need for amplifying the academic activities and engagements around the study of the luminary’s life and works. This is an attempt that we took here at Rishihood University starting with the 150-hour course, panel discussions, and webinars providing clarity and contextualisation for Sri Aurobindo’s works.”

Santishree Dhulipudi Pandit, the vice-chancellor of Jawaharlal Nehru University, was the chief guest at the event. Anirban Ganguly, director of the Syama Prasad Mookerjee Research Foundation delivered the keynote address and Jayanti Ravi, IAS officer, currently serving as the secretary of Auroville Foundation, was the guest of honour.

In the keynote address, Ganguly motivated students by speaking about the life and legacy of Sri Aurobindo and pointed out how his philosophy was applicable to all areas of life and different branches of knowledge.

Ganguly also stressed that the spiritual core of India’s freedom movement promoted by Sri Aurobindo should be contextualised and prepared for academic discourse at the centre.