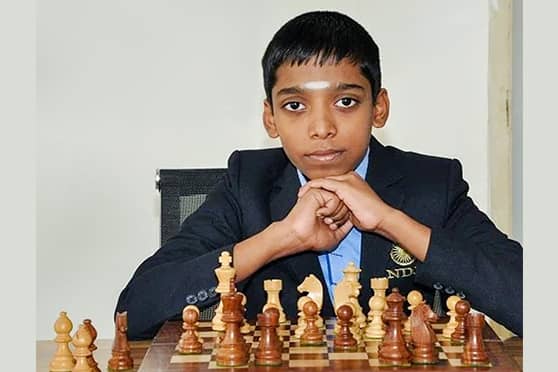 Praggnanandhaa is the youngest chess player in the world to have beaten the five-time world champion. Source: Twitter

Rameshbabu Praggnanandhaa, a 16-year-old boy from Chennai, has been winning applause and appreciation from the who’s who of the sports fraternity after beating world chess champion Magus Carlsen in an online championship recently.

Praggnanandhaa, who became the youngest international master at the age of 10 years, defeated Carlsen in Airthings Masters rapid chess tournament on February 21, becoming the youngest Indian to defeat the Norwegian five-time world champion of chess.

The Indian teen went viral on social media in no time, with popular sportspersons including cricketing legend Sachin Tendulkar taking to Twitter to praise Praggnanandhaa.

“What a wonderful feeling it must be for Pragg. All of 16, and to have beaten the experienced & decorated Magnus Carlsen, and that too while playing black, is magical,” Tendulkar wrote on Twitter.

“Best wishes on a long & successful chess career ahead. You’ve made India proud,” he tweeted along with a picture of the chess prodigy.

Other Indian chess champions, including Vishwanathan Anand and Pentala Harikrishna have beaten Carlsen in the past. However, Praggnanandhaa is the youngest chess player in the world to have beaten the world champion.

“We are all rejoicing on the success of the young genius R Praggnanandhaa. Proud of his accomplishment of winning against the noted champion Magnus Carlsen. I wish the talented Praggnanandhaa the very best for his future endeavours,” tweeted Modi.

Indian off-spinner R Ashwin, Tamil Nadu chief minister MK Stalin and many other personalities from India and abroad have praised the chess prodigy on social media since his victory against Carlsen on February 21.