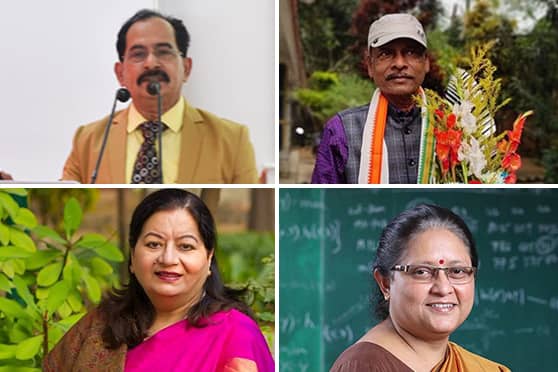 The Padma Awards are one of the highest civilian honours of India announced annually on the eve of Republic Day. Source: Facebook, Twitter, Infosys Science Foundation, VIDWAN

Several academics, scholars and authors from across India received the Padma awards, one of the highest civilian honours for exemplary work in different fields, on the eve of Republic Day 2022.

Edugraph brings to you a list of Padma awardees for Literature and Education and Science and Engineering and their contributions.

A professor in the Machine Intelligence Unit of the Indian Statistical Institute, Kolkata, Bandyopadhyay received Padma Shri this year. She has done extensive research in universities of different countries, including America, Germany, France, Italy, China and Mexico. She is also a recipient of the Shanti Swaroop Bhatnagar Prize for Science and Technology, Infosys Award and a National Women Bio-scientist Award. She joined the Machine Intelligence Unit of the Indian Statistical Institute as a faculty member in 1999, after completing her PhD from the same Institute. She was the director of the institute from August 2015 to July 2020 and is currently on her second tenure as director from September 2020 onwards.

The first woman vice-chancellor of Jamia Millia Islamia University in New Delhi, Najma Akhtar, received Padma Shri for her contribution to academics. She said the award was a recognition of the work done by her to take the university to greater heights in the last one year during which the varsity was given A++ grade by the National Assessment and Accreditation Council (NACC). Akhtar was appointed the vice-chancellor of the varsity in April 2019, the same year that saw protests against the Citizenship Amendment Act in December.

A bank employee, who simultaneously pursued his passion in literature, Saren received the Padma Shri for his contribution to Santhali literature. Born in West Bengal’s Jhargram in 1956, Saren studied political science in Kolkata. Going by his pen name, Kherwal Saran, he published the first Santhali magazine in the 1970s. Saren won the Sahitya Akademi Award in 2006 for his play Chetre Chikayena. He then translated Dibyendu Palit's novel Anubhav into Santhali, for which he received the Sahitya Akademi Award for best translator in 2019.

Known for his significant contribution to developing various tools, technologies and strategies for control of vector borne diseases in Odisha, Dash received the Padma Shri this year. He worked for over three decades at the Institute of Life Sciences in Bhubaneswar and the Indian Council of Medical Research (ICMR).

Other Padma awardees from eastern India who received the civilian award for their contribution in Literature and Education: