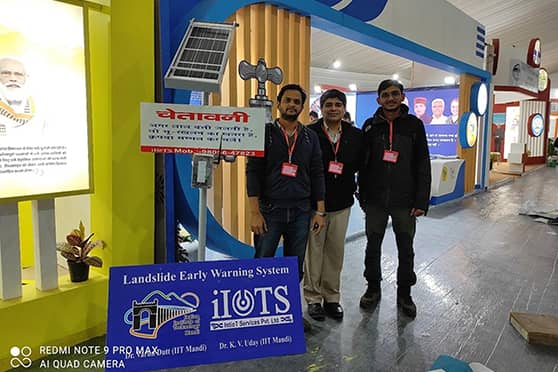 On his visit to Mandi in Himachal Pradesh, Prime Minister Narendra Modi examined the Landslide Monitoring and Early Warning system developed by the Indian Institute of Technology (IIT) Mandi. The device, the only of its kind in the world, protects against landslides by forecasting soil movement in advance.

Varun Dutt, associate professor, School of Computing and Electrical Engineering, and K. V. Uday, assistant professor, School of Engineering have developed this low-cost alternative to conventionally-used monitoring systems. The selling price of the system with its sensors and alerting mechanism is about Rs one lakh, which is nearly 200 times lower than a conventional counterpart that runs into crores of rupees.

The Landslide Monitoring System provides soil movement alerts via hooters and blinkers installed on the road remotely via text message. Moreover, the system sends rainfall alerts in advance if more than 5-mm of rain is predicted. Landslides are predicted 10 minutes before they actually occur by monitoring changes in soil movement. Artificial intelligence (AI) and machine learning are also used to anticipate extreme weather phenomena.

Due to storms and a flash flood, a disaster was averted at Kutropi along the Mandi – Joginder Nagar National Highway on July 27, 2018. Minutes before the incident, the system provided a warning. To avoid a major calamity, police stopped the traffic prior to the flash flood. The rapid flood washed away the road, yet no one was injured as a result of the timely warning.

Four patents have been filed on the developed system and it will be made commercially available via a faculty-led startup, Intiot Services Pvt. Ltd.

The prototypical device was first deployed in July-August 2017, at an active landslide area on the Gharpa hill near IIT Mandi’s Kamand campus. The first field deployment was at Kotropi Landslide in 2018 with the support from the district administration at Mandi.

Until now, 18 systems have been deployed in Mandi district apart from three systems in Balianala (Nainital district), Uttrakhand; three at Dharampur along the Kalka - Shimla track of the Indian Railways, and, three systems at Sirmaur district, Himachal Pradesh. Several other deployments are in the pipeline in several districts in HP and Maharashtra.

Landslides are the third biggest natural disasters in the world, with India experiencing the biggest bulk of them - 15% of India is prone to landslides. More than 5,000 people are buried alive under landslides costing the economic losses of more than Rs 26,000 crore suffered every year globally.