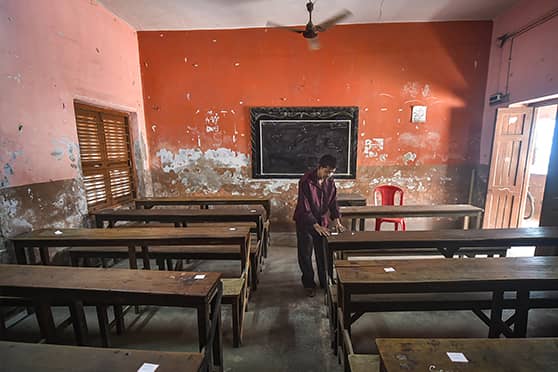 A worker pastes roll numbers of students on a bench at a school in Kolkata ahead of Madhyamik examinations. Source: PTI

West Bengal Madhyamik 2022 examinees will not be allowed to take a washroom break during the first one hour and 15 minutes after the exam begins.

The fresh directive has been issued by the West Bengal Board of Secondary Education (WBBSE), which conducts the Madhyamik examinations, to prevent students from indulging in unfair means. Earlier, students were permitted to leave the exam hall after 45 minutes of the start of the exam.

Many exam centres will be under CCTV surveillance this year.

The West Bengal government has decided to temporarily suspend internet services in some areas of Kolkata on days the Madhyamik 2022 exams are scheduled.

The area-specific clamp on the transmission of text messages, images and videos will be in force from 11am to 3.15pm on the exam days. Phone calls and SMS services will not be curbed anywhere.

According to a source, internet services were suspended on exam days earlier also but it was not announced.

“The board has no role in this issue. It is purely an administrative decision taken by the state secretariat,” said WBBSE president Kalyanmoy Ganguly.