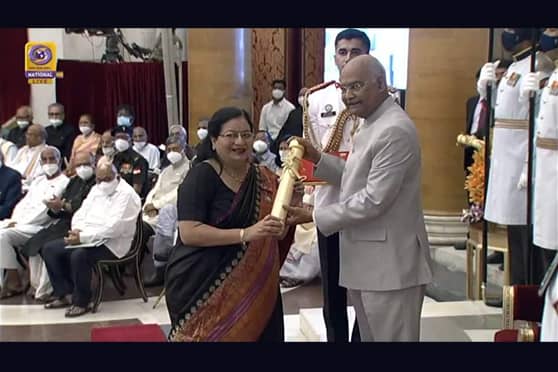 Jamia Millia Islamia (JMI) vice chancellor Najma Akhtar has been conferred with the Padma Shri, the fourth highest civilian award of the country. President Ramnath Kovind gave away the award to Akhtar at a ceremony held at the Darbar Hall of the Rashtrapati Bhavan on March 21.

Akhtar was selected for the honour for her invaluable contribution in the field of literature and education. Her daughter, Farha Khan, and son Saad Akhtar were also present during the award function.

Akhtar is the first woman vice-chancellor of JMI — an institution accredited with A++ by the National Accreditation and Assessment Council (NAAC) in December 2021. She is widely recognized as a leading educationist for having brought transformation in the delivery of quality education in premier educational institutions of the country.

Born on November 13, 1953, Akhtar received her Ph.D. in Education on the topic, “A Comparative Study on Conventional and Distance Education System of Higher Education”. A gold medalist, she holds two Master’s degrees, an M.A. in Education and an M.Sc. in Botany.

She has worked as a professor and was the head, department of Training and Capacity Building in Education at National University of Educational Planning and Administration (NUEPA), New Delhi. She worked in the Distance Education Programme at IGNOU, New Delhi and was the founder director of the State Institute of Educational Management and Training (SIEMAT) at erstwhile Allahabad, Uttar Pradesh. She has also held the position of director, Academic Programmes at Aligarh Muslim University(AMU) besides being the controller of examinations and admissions at AMU.