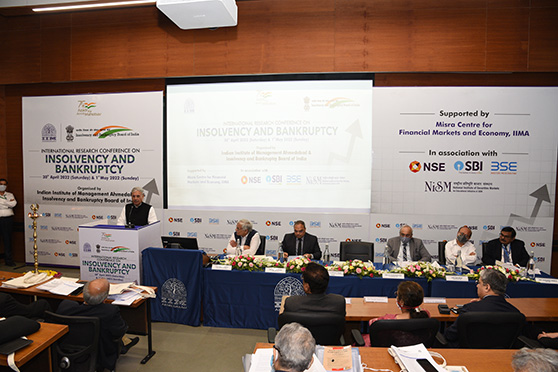 Advertisement
Summary
The two-day conference included three panel discussions that brought luminaries from government and industry, and legal practitioners and academicians under one roof
The conference focused on assessing and understanding the current situation and in deciding the future course for the insolvency regime in India

Indian Institute of Management (IIM) Ahmedabad hosted an international research conference on insolvency and bankruptcy in collaboration with Insolvency and Bankruptcy Board of India (IBBI) from April 30 to May 1.

The inaugural day of the conference saw participation of about 200 stakeholders in-person, while another about 1000 joined online.

The two-day research conference was held under the aegis of the Misra Centre of Financial Markets at IIM Ahmedabad. National Stock Exchange, State Bank of India, BSE Investors’ Protection Fund, and the National Institute of Securities Markets were associate partners for the conference.

The conference offered an opportunity to listen to India’s thought leaders and policymakers in three panel discussions planned in parallel with the research presentations.

These panel discussions brought together the luminaries from government and industry, and legal practitioners and academicians together to assess and understand the current environment and helped in setting the future course for the insolvency regime in India.

Errol D’Souza, the director of IIM Ahmedabad, said, “Just a few months ago, the Parliamentary Standing Committee on Finance had put up some issues regarding insolvency and bankruptcy. Some of the findings that they reported were interesting and we thought that it is a great opportunity to go back to the drawing board and think about what is happening in this very important part of the economy.”

The conference was inaugurated by Rao Inderjit Singh, the minister of state for statistics and programme implementation with independent charge of corporate affairs. In his inaugural address, he highlighted the journey of the Insolvency and Bankruptcy Code, 2016, in establishing a framework and effective ecosystem for insolvency resolution in the economy.

Praising the contribution of the code in reducing the non-performing assets of the banking industry and promoting entrepreneurship in the Indian economy, he cited that the code has assumed larger significance post the COVID-19 pandemic and has been instrumental in saving both lives and livelihoods.

He also lauded the contributions of the judiciary, government agencies, regulators, and stakeholders of the IBC ecosystem in facilitating swift and effective implementation of the code.

Rajesh Verma, Union secretary for the ministry of corporate affairs; M Rajeshwar Rao, the deputy governor of the Reserve Bank of India (RBI); and Ravi Mital, the chairperson of IBBI delivered the special addresses during the inaugural session of the conference.

Verma emphasised the need to promote the culture of research in a regulatory framework. Noting the achievements of the code, he also highlighted that a comprehensive IT platform for processes under the code is being worked upon.

M Rajeshwar Rao highlighted the importance of timely resolution of stressed assets for the banking sector. Lauding the paradigm shift brought by the code, he noted the need for a comprehensive framework to resolve group insolvency.

Ravi Mital noted the importance of evidence-based research in policy making. He emphasised that time is the essence of the code and basic research efforts should be made by all stakeholders to cut down the delays at all stages of insolvency resolution beginning with recognition of stress to final resolution.

Details may be seen at the IBBI and IIM Ahemdabad websites on www.ibbi.gov.in and https://conference.iima.ac.in/ibc2022.