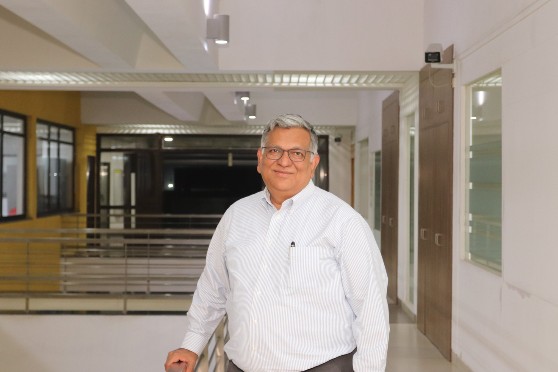 Jain has carried out extensive research in the fields of Seismic Design Codes, Post Earthquake Studies and Dynamic of Buildings. Facebook

Advertisement
Summary
Jain had been serving his third term as the director of IIT Gandhinagar
A Padma Shri awardee, he has helped develop several important seismic codes in India

For his renewed services in the field of science and engineering, he has been conferred with the Padma Shri in 2021.

Jain will hold the V-C’s office for a period of three years from the day he assumes charge of the post. A qualified civil engineer, Jain had been serving his third term as the director at IIT, Gandhinagar, which he had joined as the founder director in 2009.

Jain has carried out extensive research in the fields of Seismic Design Codes, Post Earthquake Studies and Dynamic of Buildings, focused specifically on developing countries.

Jain earned his Bachelor of Engineering degree from the University of Roorkee (now known as IIT Roorkee) in 1979, and his Masters and Doctoral degrees from the California Institute of Technology, Pasadena in 1980 and 1983 respectively.

He had been part of the IIT Kanpur faculty for 35 years, from 1984 to 2019. Jain has experimented with numerous ideas in curriculum, student affairs, faculty recruitment and faculty management.

Jain has been a consultant for major projects, such as bridges, petrochemical pipelines and concrete dams and has published more than 150 scholarly papers. His research interests include study of damaging earthquakes, and reinforced concrete buildings and bridges.

Bakery to jewellery, youthpreneurs sold creative products at a pop-up in Kolkata