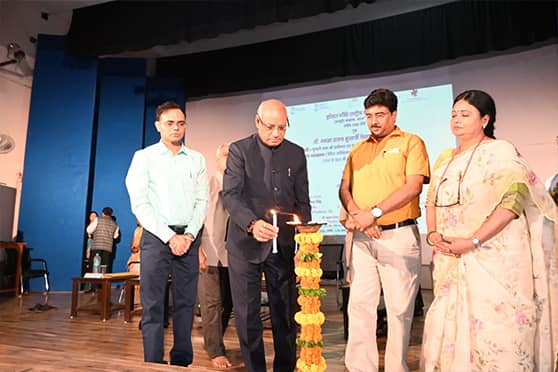 The programme, a part of Azadi Ka Amrit Mahotsav, was inaugurated by Jharkhand governor Ramesh Bais. The lamp-lighting ceremony was followed by a Mundari song presented by the students of the tribal language department of the university to welcome the guests.

In his welcome address, DPSMU vice-chancellor Nitin Madan Kulkarni, spoke about the two components of the programme — a seminar on the Mundari language, ancient history and its relevance and an illustrated exhibition titled ‘Azadi ka Ranbheri’ (Battles for Freedom) on 75 revolts between 1757 and 1857.

Governor Bais, who is also the chancellor of the university, presented a brief description of the tribal movements of Jharkhand. He talked about inculcating the feeling of patriotism in the younger generation by turning Azadi Ka Amrit Mahotsav as a mass movement and advised all universities to encourage students to visit villages of freedom fighters and find out their history.

“This is needed so that the government can use this information and develop them as model villages. Such seminars are very useful and meaningful for the students,” said Bais.

Anand Vardhan, senior professor of Dr. Bhimrao Ambedkar University (formerly Agra University), explained the history of tribal movements from the Pahariya Revolt of 1766 to the Santhal Rebellion of 1855.

The origin of Mundari language, the development of script and structure and the importance of indigenous culture were highlighted by Kumar Sanjay Jha, regional director of Indira Gandhi National Centre for the Arts.

Namita Singh, registrar of DPSMU, proposed the vote of thanks.