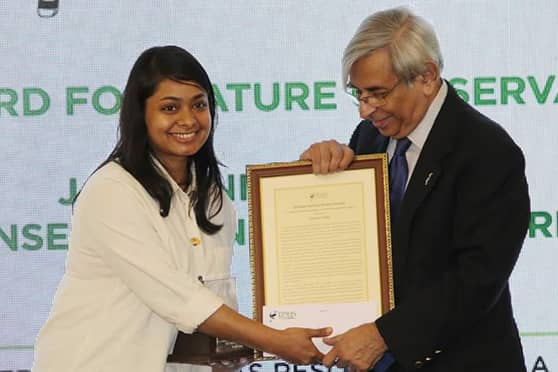 Garg has the distinction of discovering 50 new frog species. According to a statement by the Delhi University’s department of Environmental Studies, she is probably the first Indian woman to have achieved this feat.

The postdoctoral fellowship programme is named after American biologist Edward O. Wilson -- faculty-curator emeritus and university research professor emeritus at Harvard -- who has often been touted as “Darwin’s natural heir”.

It is being offered by the Museum of Comparative Zoology (MCZ) at Harvard University and has also been supported by additional donors. MCZ was founded in 1859 in affiliation with the department of Organismic and Evolutionary Biology. It is a centre for research and education focused primarily on the comparative relationships of animal life. Through this fellowship, Garg will be able to further take her quest for the discovery of earth’s animal species forward.

She completed her PhD from the department of Environmental Studies, University of Delhi, under professor S D Biju.

The Delhi University statement further said that Garg has been travelling to remote forests of the Western Ghats, Northeast India and the Andaman and Nicobar Islands to study frogs in their natural habitat.

Outside India, she has been to Sri Lanka, Indonesia and Thailand for her scientific endeavours. She found the smallest frog in Indonesia.

Her research focuses mostly on finding the unique diversity of frogs, studying their evolutionary relationships using DNA, and biogeography to understand the patterns of historical and present-day distributions.

The fellowship programme supports postdoctoral researchers at MCZ to discover and find the formal taxonomic description of animal species on earth. Fellows will be working under the supervision of one or more faculty-curators of MCZ. They will be provided office space, access to laboratory facilities and research support. The programme aims to achieve broad taxonomic coverage that is not restricted to any particular taxon.

A PhD with relevant research experience in taxonomy and/or systematics is awarded this fellowship, both in the United States and other countries. The formal requirements for the doctoral degree must be completed prior to the beginning of the fellowship.