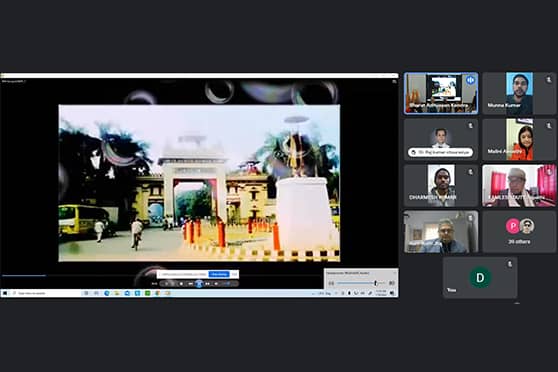 The two-year postgraduate course will be spread over four semesters. Source: BHU

Advertisement
Summary
First batch for the two-year course comprises 45 students, one of them being a foreign national
Masters in Hindu studies will be conducted in BHU’s Bharat Adhyayan Kendra, a centre established in the centenary year of the university

Banaras Hindu University (BHU) has welcomed the first batch of students for its newly-launched Masters course in Hindu Studies. This is the first such postgraduate programme in India. The first PG batch comprises 45 students, one of them being a foreign national.

BHU rector V K Shukla inaugurated the course at a programme organised in the hybrid mode on January 18. He said that the Hindu Studies course is an interdisciplinary programme in line with the new National Education Policy (NEP) 2020.

Shukla added that it was a matter of great pride for BHU that the two-year course was being conducted at Bharat Adhyayan Kendra, a centre established in the centenary year of the university. He stressed that the course will make the world aware of many unknown aspects of the Hindu Dharma and help in spreading its teachings to more people.

Addressing the programme, Indira Gandhi National Centre for Arts director Vijay Shankar Shukla underlined the need to have such a course on Hindu Studies. “The idea behind this goes back to 18th Century scholar Ganganath Jha and travels through time to Mahamana. However, the link was broken for some reason. But, with the initiation of this course, the goal appears to have been achieved,” he said.

The course has been started under the Faculty of Arts and will be conducted at Bharat Adhyayan Kendra in collaboration with the department of Philosophy and Religion, department of Sanskrit and department of Ancient Indian History, Culture and Archaeology.

The programme was chaired by Kamlesh Dutt Tripathi — chancellor of Mahatma Gandhi Antarrashtriya Hindi Vishwavidyalaya, Wardha and Centenary Chair professor at Bharat Adhyayan Kendra. Tripathi underlined the values and mantra of unity that are core to the Hindu Dharma. He added that one cannot separate Hindu Dharma from being constantly logical and scientific.

The time table of the first week comprises lectures on “Evolution of Hindu Dharma”, “What is Hindu Studies”, “The antiquity and the meaning of the term Hindu”, “Indian Epistemology & Metaphysics”, “Hindu of Foreign Origin” and “Hinduism & Brahmanism”.

The programme was attended by all the newly admitted students of the course, centenary visiting fellows and scholars from all over the country. The event concluded with the National Anthem.