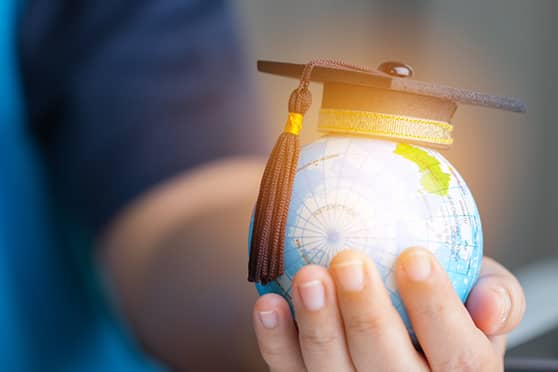 The Francis and Dionne Najafi Global Initiative will provide millions of people with the global management and entrepreneurship skill sets Source: Shutterstock

The Thunderbird School of Global Management at Arizona State University rolled out its new global initiative in Mumbai on March 2 to educate and empower 100 million learners across the world by 2030.

The global initiative will be rolled out across different continents. The announcement coincides with the opening of Thunderbird’s Center of Excellence in Mumbai, part of a global network of offices expanding the institution’s engagement and impact worldwide.

Thunderbird has received USD 25 million donation from the Francis and Dionne Najafi Global Initiative. Thunderbird will use the donation to offer an online Global Management and Entrepreneurship Certificate, consisting of five world-class courses in 40 different languages. The certificate will be covered by 100% scholarships and be made available at no cost to learners.

The Francis and Dionne Najafi Global Initiative has been made possible through a generous initial gift of USD 25 million from prominent Phoenix businessman and Thunderbird alumni F Francis Najafi and his wife Dionne Najafi.

Vaibhav Singh, co-founder of Leap Scholar, said, “Leap Scholar is committed to enabling and empowering students by democratising access to global education and careers. We are ready to partner with Thunderbird School of Global Management, ASU, which is ranked number 1 for Global Management, in implementing the 100 million learners initiative in India which will further boost the vision of bringing the best global opportunities to aspiring students.”

Learners in the Francis and Dionne Najafi Global Initiative will receive a badge for each course they complete and a Thunderbird executive education certificate upon successful completion of all five courses. They will gain 21st century skill sets to catapult their professional careers.

Learners will also have an almost limitless number of lifelong learning options and alternative educational pathways through Thunderbird and ASU, and may even apply for an accredited 15-unit certificate from ASU Thunderbird upon completion.

By the second year, the programme will be expanded to cover Africa, West Asia, Asia and Latin America to at least 25 languages. By year fourth year or earlier, the Global Initiative will be expanded to Europe and Central Asia and 40 total languages. Eventually, the initiative will be available to all learners around the world, reaching the institution’s goal of 100 million learners.