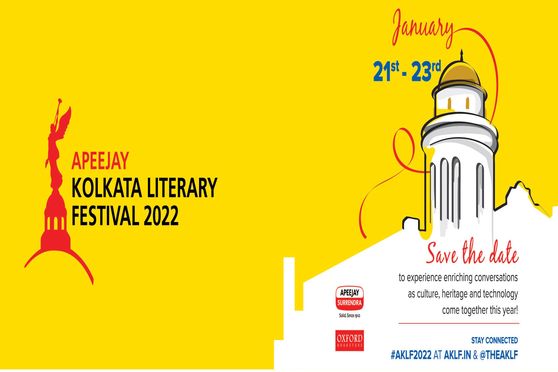 One of the highlights of the event is the shortlisting of the Oxford Bookstore Book Cover Prize 2022. Source: Facebook

The 13th edition of Apeejay Kolkata Literary Festival (AKLF), which attracts bibliophiles and aspiring authors from across the country, will be streamed live on the social media pages of AKLF from January 21 to 23.

This is the first time that the festival is going all-digital with live-streaming on Facebook and YouTube. The festival will be inaugurated at 2.45pm on January 21 and be streamed till 9.40pm. The sessions on January 22 and 23 will be streamed from 2pm to 9.40pm.

“Our theme this year is celebrating a century in books by the iconic Oxford Bookstore on Park Street. The festival started from the bookstore in 2010 and was the first of its kind in eastern India,” said Maina Bhagat, director, AKLF.

One of the highlights of the event is the shortlisting of the Oxford Bookstore Book Cover Prize — a unique award that applauds and encourages book cover designers. Another event of great importance, Bhagat said, is a centenary tribute to late film historian Chidananda Dasgupta.

Blending the vintage and the contemporary, AKLF is set to focus on themes like contemporary fiction, culinary arts, holistic wellbeing and non-fiction. The 24 curated sessions will focus on children and adult literature, poetry, politics, parenthood, and translations among others.

Some of the eminent speakers who will be a part of this edition of AKLF are children’s author Andy Griffiths; author and journalist Jeet Thayil; author, journalist and film critic Anupama Chopra; actor and director Aparna Sen; actors Kabir Bedi and Jugal Hansraj, and veteran theatre actress Dolly Thakore.

For more details on speakers and the full schedule click https://www.aklf.in/