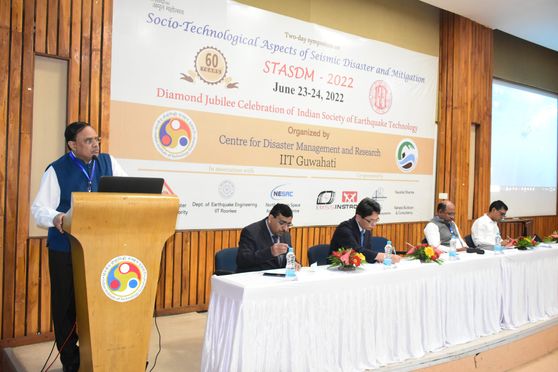 Advertisement
Summary
The conference emphasised on the role of learning from historic earthquakes, confined masonry, role of local soil in amplifying ground shaking etc
Discussions were conducted on direction in policy-making in light of the natural disasters in Assam

The Indian Institute of Technology (IIT) Guwahati organised a two-day symposium on June 23 and 24 on 'Socio-Technological Aspects of Seismic Disaster and Mitigation (STASDM)' as part of the 60-years celebrations of the Indian Society of Earthquake Technology (ISET).

The event was organised jointly by the Centre for Disaster Management and Research (CDMR), IIT Guwahati; North Eastern Space Application Centre (NESAC); Assam State Disaster Management Authority (ASDMA); Department of Earthquake Engineering, IIT Roorkee and ISET. Students and faculty from different parts of the North East and other parts of the country participated and presented their research findings.

The symposium included plenary talks, followed by invited talks in the domain of seismic disaster and mitigation by various stalwarts across the country. Talks were delivered both in online and offline modes.

TG Sitharam, director, IIT Guwahati and president of ISET was the patron of the symposium. Sitharam said, “There is a high need to learn particularly about vibration isolation techniques which were used in ancient structures. Further, regional seismic hazard should be given due importance in the current scenario.”

Assam has been severely affected by floods at present and is prone to earthquakes. There were panel discussions in which experts from institutes, such as ASDMA and NESAC, as well as various industries participated to discuss how to deal with seismic disaster and mitigation and further direction in policy making.

The conference emphasised on the role of learning from historic earthquakes, confined masonry, role of local soil in amplifying ground shaking, inclusion of earthquake loading on structural and foundation design towards minimising induced damages during due earthquake.

Further, the need for research, industry and policy makers to jointly work towards disaster mitigations were also deliberated during the symposium.