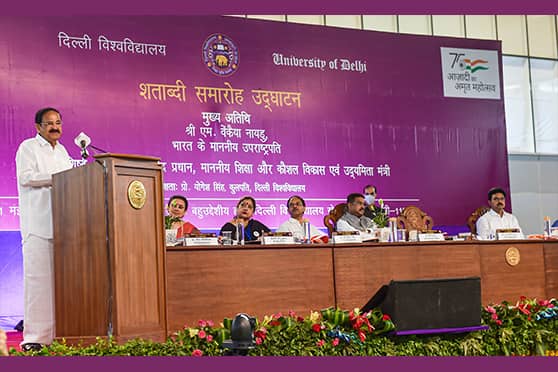 Vice President M Venkaiah Naidu has called for taking higher education to the rural areas and making it more "inclusive and equitable", stressing that education plays a key role in human development, nation-building, and creating a prosperous and sustainable global future.

Speaking at the inaugural ceremony of the Delhi University centenary celebrations on May 1, Naidu emphasised that universities must come out with innovative and out-of-the-box ideas to address the pressing problems of the society.

"Inclusiveness and equitable access to education to rural youth is critical because education plays a key role in human development, nation-building, and creating a prosperous and sustainable global future," Naidu said.

Union education minister Dharmendra Pradhan and DU vice-chancellor Yogesh Singh were among a host of dignitaries who attended the event.

Naidu said the ultimate aim of research should be to make people's lives more comfortable and happier.

Pointing out that India has the world's largest youth population, the vice president called for harnessing the collective power of human resources for nation building.

Describing the National Education Policy (NEP-2020) as a "far-sighted document" which is set to revolutionise the educational landscape of the country, Naidu said its emphasis on imparting education in one's mother tongue when implemented in schools, colleges and universities, will prove to be a game-changer.

Calling for providing basic education in a child's mother tongue, Naidu said that local language must be the main mode of communication in the administration and courts.

"Every gazette notification and government order should be in the local or native language so that the common man understands it," he added.

Declaring that it is his deep-seated wish to see Indian varsities ranked among the top 10 universities of the world, Naidu asked all stakeholders to work with this aim in mind.

Speaking on the occasion, Pradhan said that Delhi University will offer solutions to global problems, emerging as an incubator of the world.

He called upon the DU alumni to create a model for the country in alumni contribution. The minister congratulated the university for being a pioneer in implementing all aspects of NEP 2020.

Pradhan expressed confidence that the university will play a leading role in churning out global citizens, establishing India as a knowledge-based society and in creating a benchmark model for emerging economies.

He also launched the centenary website of the university and felicitated Kritika Khinchi, student of Gargi College and creator of the centenary logo for DU.

Naidu said this university, which started on May 1, 1922 with 750 students and only three colleges, has become a prestigious university of the country and the world.

Counting the achievements of DU, the vice-chancellor said in these 100 years, Delhi University has reached every home and every mind of the country. He added that DU will have to do a lot in the next 25 years.