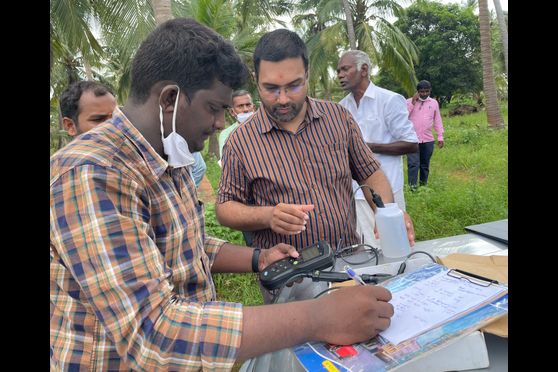 Advertisement
Summary
Researchers have proposed implementing a rapid groundwater recharge technology for combined flood and drought mitigation near Ayankulam village in Thisayanvilai taluk of Tirunelveli District, Tamil Nadu
A proposal for this project has been submitted to the Tirunelveli District Administration

The region surrounding this village is considered a dry belt with hot summers. Many small land-holding farmers have abandoned their farming practices and work as labourers in larger farms or other labour-based occupations. Being close to the coastal zone, several agricultural and domestic wells in the region suffer from saltwater intrusion due to excessive pumping and lowering of groundwater levels.

However, to the surprise of many researchers and villagers, an open agricultural well in Ayankulam was widely reported to recharge an estimated 1,500-2,500 litres of water every second for several weeks without overflowing. The recharge water for this well came from the excess overflow of an adjacent minor irrigation tank due to the record monsoon rains in November and December last year.

This well became a local attraction and was called a “miracle well” since typical wells would fill and overflow in a matter of hours at such recharge rates. Tirunelveli District Administration requested IIT Madras to study this phenomenon.

A team led by Venkatraman Srinivasan, assistant professor, Department of Civil Engineering, IIT Madras, visited the site between December 2 and 3 last year to investigate this phenomenon and explore the potential of this well and possibly other wells in the region for use as rapid aquifer recharge during monsoon floods for storage and withdrawal during the dry summer months.

“This is a win-win situation for all stakeholders. The excess water which causes devastating floods and would otherwise empty into the ocean is being channelled to recharge the groundwater for storage and retrieval in the dry summer months,” said Srinivasan.

The IIT Madras Team suggested implementing a ‘Rapid Recharge Technology,’ which, when developed, can bring several potential benefits to the region. The technology is expected to mitigate floods and droughts, create a subsurface dam for water storage without evaporation loss, and distribute water automatically and equitably throughout the region. It may also prevent and reverse saltwater intrusion in coastal aquifers

The rapid groundwater recharge technology proposed for this study area is different from conventional rainwater harvesting or well recharge. For example, in Chennai, groundwater recharge is practiced in every household by collecting rooftop rainwater. This comprises of thousands of recharge structures, each capable of recharging about 150,000-200,000 litres of rainwater over a good monsoon season. In contrast, the proposed recharge technology at Ayankulam village will consist of a few dozen wells, with each well capable of recharging 1,50,000 to 2,00,000 litres of water every minute during floods.

Srinivasan said, “The unique hydro-geology of the region allows the implementation of this rapid aquifer recharge. In most other places, wells do not sustain such high injection rates and would easily overflow.”

A preliminary assessment by IIT Madras indicated that subsurface geology of the region was likely a ‘Fractured/Karst aquifer,’ which has hydraulic conductivities that are orders of magnitude larger than conventional aquifers. This unique hydro-geology of Thisayavilai taluk and surrounding areas enables rapid recharge during floods. The recharged water will be stored underground and retrieved during dryer months.