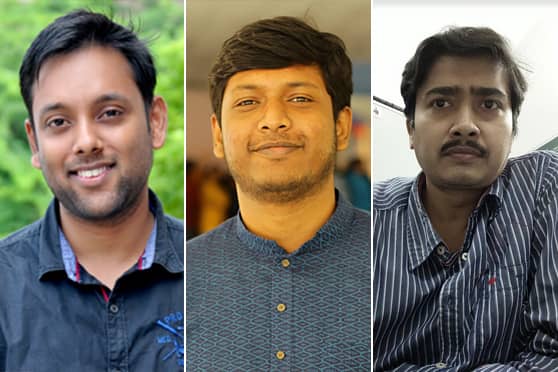 Indian Institute of Technology Guwahati researchers have found distinctive similarities between the nature of dark matter and neutrinos. In the endeavour to unfold the nature of dark matter, a trio of theoretical physicists, professor of Physics Arunansu Sil and two of his Ph.D students Arghyajit Datta and Rishav Roshan of IIT Guwahati, Physics department, have found that the origin and production of dark matter can actually be connected to the origin of neutrino mass. The work has recently been published in the leading international journal, Physical Review Letters.

For decades, physicists have speculated about the presence of ‘dark matter’ in our Universe. Though its existence is inferred from its gravitational effect on visible matter, supposed to make up 27% of the Universe, little is known about it as no direct evidence in support of dark matter could be found so far indicating it as an exotic type of matter. At the same time, among all the known particles in nature, neutrinos are perhaps the most elusive particles. There are three flavours of neutrinos according to the standard model of particle physics, the immensely successful theoretical framework describing matter and interactions in nature. This model predicts the neutrinos as massless. However, during the late 90s, it was found that neutrinos do have tiny mass, the exact magnitude of which is still unknown.

Neutrinos are somewhat distinctive from other particles in the Standard Model as it is the only fermion which is of ’left-handed’ type, related to its spin projection. The mystery of neutrino mass may be related to the lack of its right-handed counterpart. In fact, the present work of the team shows that the lightest right-handed or sterile neutrino, provided it exists as a part of a popular neutrino mass generation mechanism, having a mass of order a kilo to a mega electron-volts can be the dark matter candidate.

Highlighting the unique aspect of their work, Sil said,“Although strongly hinted at by several astrophysical observations, the lack of any direct evidence of dark matter particles suggests that it has a very feeble interaction with ordinary matter. Our proposal provides a clue to such a miniature interaction by showing that its smallness is connected to the lightness of the neutrino mass (smallest one) which is uniquely predicted to be in the pico electron-volt range.”

Datta added that apart from explaining the dark matter and tiny neutrino mass, the same construction also addresses the third mystery. “Why is there more matter than antimatter in the Universe? The two remaining sterile neutrinos, other than the dark matter one, in the model are responsible for such an asymmetry.”

Roshan elaborated on it by saying, “We here take an interesting step ahead by showing for the first time that in fact the entire dark matter content of the Universe can be produced from the decay of the mediators of the weak force in nature and the Higgs Boson in the early Universe and can easily obey cosmological bounds.”

The work bridges the three most prominent and long-standing mysteries of particle physics and cosmology within the most minimal extension of the Standard Model which can be falsifiable in ongoing and future experiments, Sil said, explaining the importance of the research.

Attempts have been made in the past to also use such sterile neutrinos as dark matter; however, those are currently under severe constraints from the non-observance of X-ray signals and cannot satisfy the observed dark matter density due to the difficulty associated with their production in the early Universe.

Caption: The research has been conducted by professor of Physics, Arunansu Sil and PhD students Arghyajit Datta and Rishav Roshan of IIT Guwahati, Physics department.