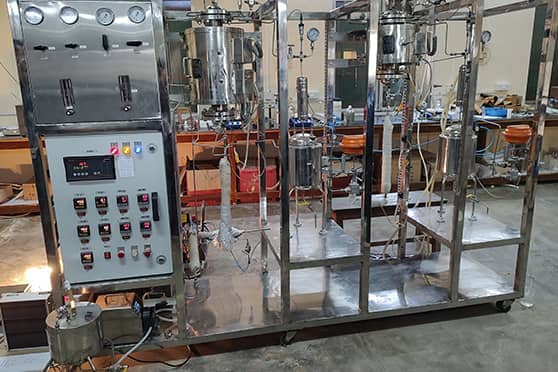 The device requires only 0.6 lit/hour of methanol for the production of around 900 lit/hour of hydrogen. Image Source: IIT BHU Varanasi

Advertisement
Summary
The device is easy to use and covers a minimum space of 2 square-metre area
It can potentially change the hydrogen energy prospects in India and make hydrogen an energy source for fuelling India’s transportation and power needs.

The Indian Institute of Technology (BHU) Varanasi's scientists have developed a first-of-its-kind system in India for producing ultra-pure hydrogen, on-site. This is a significant development in the United Nations Sustainable Development Goals, especially as India has pledged to zero net emissions by 2070 at the COP 26 Climate Summit.

The system is easily installable in petrol pumps. Some of the critical needs the device delivers include generating hydrogen for hydrogen vehicles, making charging of EVs easy and supply of power to mobile towers.

The compact and ergonomically designed device caters towards sustainability and portrays socio and economic benefits. It is based on membrane technology for on-site production of ultra-pure hydrogen from methanol. It generates hydrogen which is fed to the fuel cell to generate power (electricity). Further, the produced power can be used for EV charging, supplying power to mobile towers, and can also be installed at petrol pumps to generate hydrogen for hydrogen-based vehicles.

The device is easy to use and covers a minimum space of 2 square-metre area. Moreover, it requires only 0.6 lit/hour of methanol for the production of around 900 lit/hr of hydrogen.

In order to reduce the carbon footprint and dependency on fossil fuels, the Government of India recently launched the National Hydrogen Mission and National Electric Mobility Mission Plan. However, it pertains to two major concerns – firstly, charging EVs through clean and green energy and secondly, commercializing hydrogen energy’s storage and transportation. Understanding the nuisance, the experts from IIT (BHU) Varanasi stepped up their support and effort to solve both of these issues through this device.

The team recently demonstrated this device and produced 1 kilo-watt power by integrating it with a PEM fuel cell. The team is also developing a self-sustaining device that will not require any external energy for its operation.

Leading the research, Upadhyay stated, “The indigenously designed device is India’s first of its kind producing Ultra- Pure Hydrogen. This innovation can be used to develop a mobile EV charging station and with its use the EVs can be charged without using the grid power. It can also be used to power the mobile tower, which at present need around 3-5 kilo-watt power and mostly run on diesel generators. Hence, this new device will foster an economic benefit by reducing the infrastructure and power industry load. We are also looking at replacing diesel generators and reducing diesel consumption significantly through this.”

Upadhyay and his team are also working to make a similar kind of device that will be operated using natural gas. It will produce hydrogen at a much lower cost and will be even more compact. The project is funded by GAIL (India) Ltd. He added that soon he will start testing the natural gas-based device for on-site hydrogen generation.

Pramod Kumar Jain, director - IIT (BHU) Varanasi, added, “The prototype unit based on the membrane technology promotes the Prime Minister’s 'Make in India' and 'Self-reliant India' initiatives. The developed device can potentially change the hydrogen energy prospects in India and make hydrogen an energy source for fuelling India’s transportation and power needs. This technology can be a turning point not only in the research areas but also to each and every individual in one way or the other. With efficient experts and researchers on board, the Institute is working on all aspects of hydrogen energy and is willing to establish a center of excellence in the Institute to accommodate the production and utilization of hydrogen energy for useful applications, especially in the transport and mobile sector.”