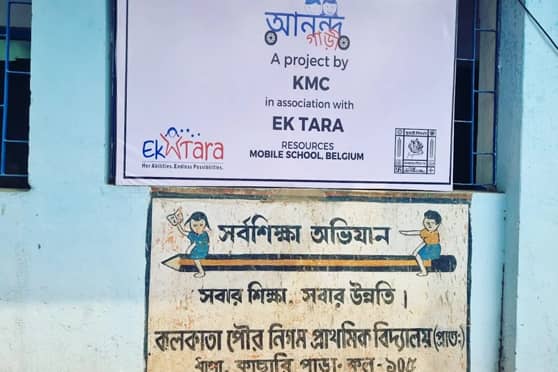 The cart will be parked on the KMC school campus and used to teach students three days a week during school hours. At least three to four Street Educators will be conducting the learning sessions.

“We had been taking the cart to the slums since 2017 to teach children who are not able to go to school but we had to stall the project because of COVID. Now, we are excited to run the Anondo Gari project in KMC schools. We are also training girls from the community to run the project,” said Shamima Khatoon, one of Ek Tara’s Street Educators trained by the Belgian partners in 2017.

Students, staff and residents of the area attended the inauguration ceremony held at the school. The initiative was inaugurated by the member, mayor-in-council (MMiC), education, Sandipan Saha. Instead of cutting a ribbon, the unique project was launched by signing on the blackboards installed on the cart.

MLA Swarna Kamal Shah was the guest speaker at the ceremony.

“Instead of learning with pen and paper, students can learn interactively using the cart. For two years, students have not been able to come to school because of the pandemic. Now that they have returned, their interest in learning needs a boost. The cart will make students more invested through joyful learning,” Sandipan Saha said.

Anupriya Bhattacharya, associate director, Ek Tara, agreed. “The cart is an excellent tool to bring students back to school. The education system needs to be more adept at delivering a holistic programme for children. To do that, innovation is important and Mobile School brings that innovation. It uses games, conversations and discussions to bring back the children, most of whom are first-generation learners, to the schools.”

“We at Ek Tara have been waiting for this for so long. We finally have a collaboration with KMC and can roll out the Mobile School cart with new goals. These children will have access to high-quality resources making learning fun and giving them an opportunity to bring out their best,” said Vinita Saraf, Founder Trustee, Ek Tara.

Several students can be taught at the same time using extendable blackboards and learning panels. Ek Tara is the first Indian organisation to partner with Mobile School to bring such an initiative to the country.

Street Educator Shaista Parveen explains the use of one of the panels on the learning cart. Source: Ek Tara

The NPO provided Ek Tara with a five-foot-long extendable cart with over 350 eye-catching resources in English, Hindi and Bengali languages. Soon, the cart is set to cater to a total of four Kolkata Municipality Corporation (KMC) schools.

Ek Tara works to empower girls and women in the low-income communities of Topsia and Tiljala area. With the mobile cart, Ek Tara not only wants to help KMC students bridge the learning gap but plans on skilling local youth to become teachers as a part of the initiative.

Shamima Khatoon, one of Ek Tara’s Street Educators trained by the Belgian partners in 2017, said, “Since 2017 we used to take the cart to the slums to teach the children who are not able to go to school. But due to Covid, we had to halt the project. Now we are excited to run the Anondo Gari project in KMC schools. We are also in the process of training girls from the community to run the project.”