As I travelled, I saw the food and its elements change in taste while retaining the essential ethos of the cuisine

My tryst with authentic Vietnamese cuisine began with a visit to a small restaurant in New Delhi called Little Saigon. It was behind a blink-and-you-miss-it door and run by a Vietnamese family who cooked up a storm in their tiny kitchen 10 months of the year and retired to their home land for two. The cuisine, is marked by fresh herbs and vegetables, contrasting textures and rich flavours, and is also considered one of the healthiest in the world.

I’d be lying if I didn’t admit that one of the big reasons for choosing Vietnam as the destination for my solo trip was this cuisine. My three main stops during the journey were the cities of Hanoi, Da Nang and Ho Chi Minh City, which are in the northern, central and southern parts of the country, respectively. And as I travelled, I saw the food and its elements change in taste while retaining the essential ethos of the cuisine.

The north of the country is relatively colder with fewer spices available. So, salt is the ingredient that dominates the palate here. The middle portion of the country is where spices are grown in abundance while the southern part of the country bends towards sweet as the main taste of most dishes. The use of meat is abundant with fish sauce, shrimp paste, soy sauce, lime, pepper and salt being used in copious amounts in every dish.

“What I found when I came to this part of the world, Vietnam in particular, is that my palate changed. I needed an elevated level of chillies and heat,” late celebrity chef Anthony Bourdain, whose love for this country and its cuisine is unmissable, had said. The way every taste bud is respected and appreciated in their dishes is what lends the elevated status to this cuisine.

Vietnamese people eat all meats — from animals to rodents — with rat meat being served as a delicacy at weddings by certain ethnic groups. The rats are of a different breed and kind, we are told, and is best avoided by foreigners who don’t have the stomach for it! In the north, rice is the main ingredient for dishes, sometimes in the form of sheets used to wrap around meats and herbs, or in the form of noodles or in its original form that is sticky rice.

Coffee was initially grown only in southern portions of the country while tea was cultivated in the northern parts. However, as Vietnamese coffee grew in prominence around the world, the bean was soon found to be cultivated in every part of the country, mostly for trade. Variations to this coffee have now been introduced in the market, especially for tourists, so be prepared to find egg coffee that tastes awfully similar to the quintessential tiramisu, or coconut coffee. A personal opinion quite unpopular amongst coffee connoisseurs would be that Vietnamese coffee, served with condensed milk, is best enjoyed cold!

At one of the northern-most tip of the country is the Ha Giang province and Ha Duong province, that are known for litchi cakes and green bean cakes. 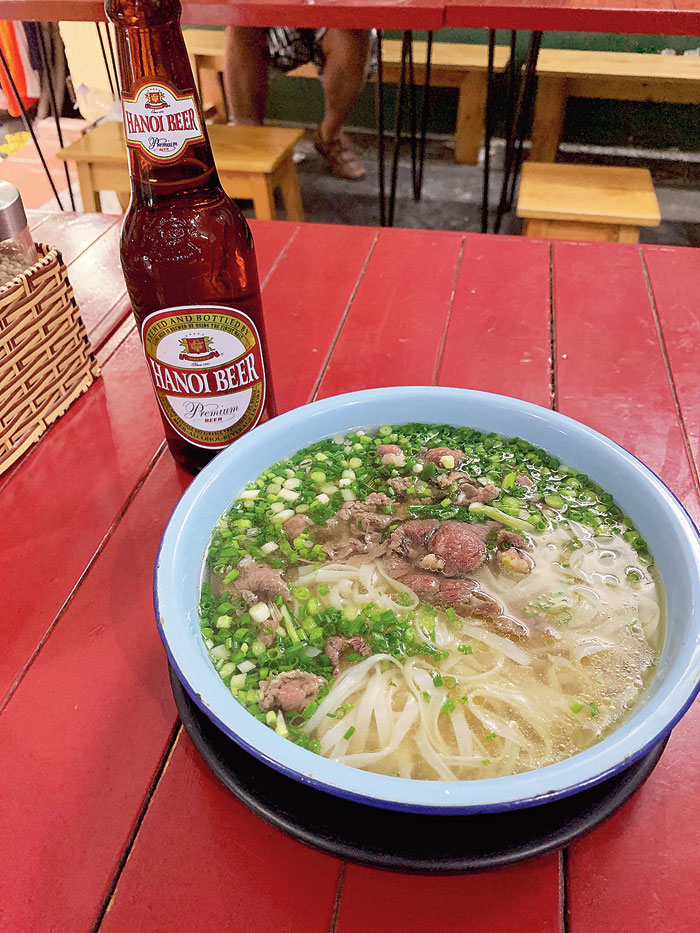 When in Hanoi, one must make it a point to visit Pho Bo Mau Dich, a small eatery beside the Hoan Kiem Lake that serves one of the best plates of beef pho that I had on this trip. The street cafe may not provide air conditioning in the humid Vietnamese heat but the beef pho most definitely makes up for it. Wash it down with a bottle of Hanoi beer and you have the recipe for a perfect afternoon. 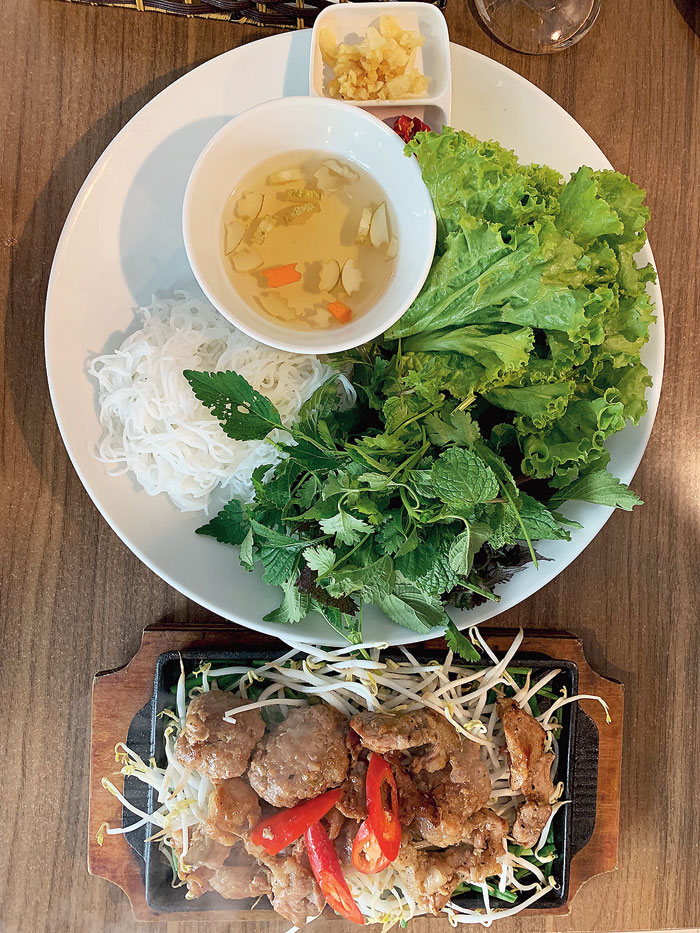 2

Enjoy a great plate of bun cha at Hoang’s Restaurant, located in the middle of Old Quarter in Hanoi
Shrestha Saha

Seen here is a plate of quintessential bun cha made of pork meat. The pork is minced and made into round balls with spices that are then lightly seared in little oil. On the side is rice noodles, lettuce, coriander, rocket leaves, garlic, chillies and a bowl of fish sauce for dipping before the first bite! Enjoy a great plate of bun cha at Hoang’s Restaurant, located in the middle of Old Quarter in Hanoi. 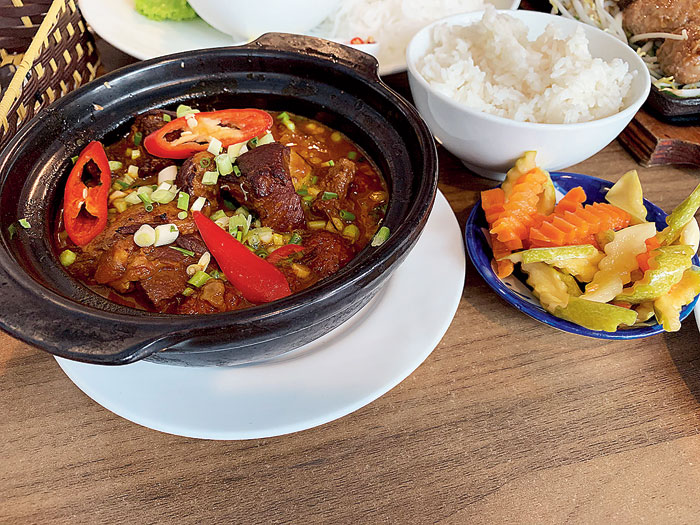 While at Hoang’s Restaurant, don’t stop at a bun cha. Also order a plate of their pork in claypot served with fermented vegetables and sticky rice on the side. What’s great about most popular eateries of Vietnam is the availability of cooking classes, which include shopping for raw materials from the market under local supervision and then coming back to the kitchen with your spoils to learn to cook three dishes of your choice. 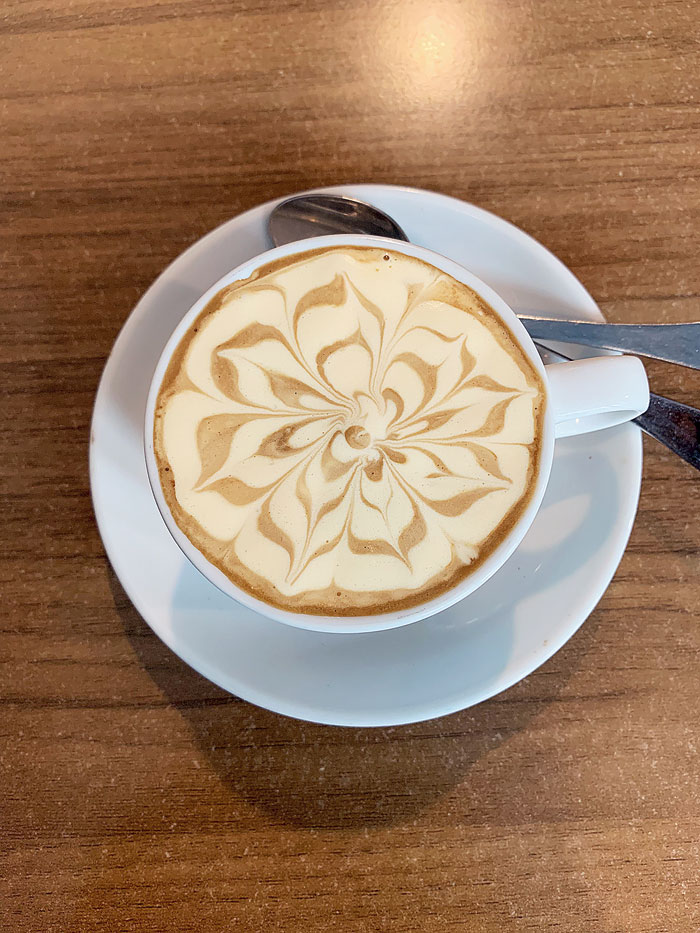 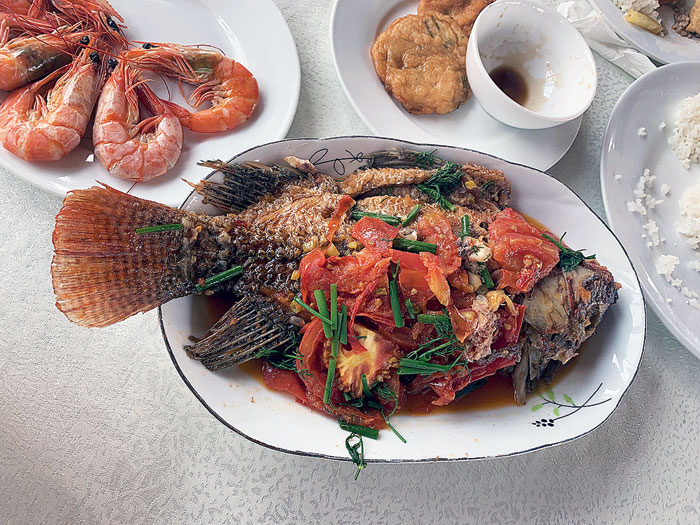 5

On the cruise, which is the most popular way of travelling in this crowded bay, expect to be served fish cooked with vegetables like tomatoes and herbs like coriander
Shrestha Saha

Fresh fish is found in abundance when in the vicinity of Halong Bay, the jewel in Vietnam’s tourism crown. On the cruise, which is the most popular way of travelling in this crowded bay, expect to be served fish cooked with vegetables like tomatoes and herbs like coriander. Learn to make rice paper or in other words, discover how extremely difficult it is to make rice paper on this trip while you dig into this soft tender fish that can even appease the strict palate of a Bengali! Expect a similar fare when travelling through Ninh Binh, which is considered the Halong Bay on land. 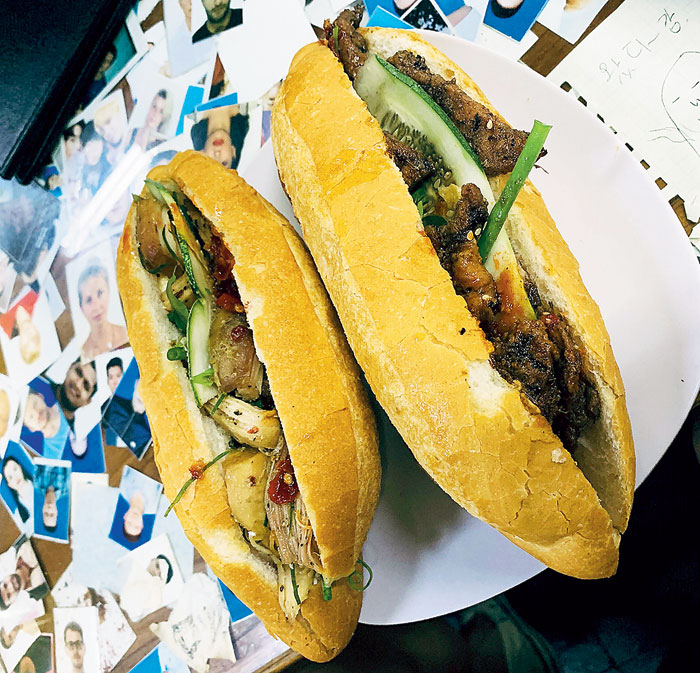 6

Succulent pieces of meat cooked to perfection, is stuffed between hardened bread that is soft on the inside, along with vegetables like cucumber, lettuce and chillies.
Shrestha Saha

Banh Mi Phuong housed at 2B Phan Chau Trinh in Hoi An village has Anthony Bourdain’s face on their menu and throng of people lining up to get a bite of their famous banh mi. And why not? For the celebrity chef, on his fifth season of Anthony Bourdain: No Reservations had said that if one must have banh mi in Vietnam, it has to be here! Succulent pieces of meat cooked to perfection, is stuffed between hardened bread that is soft on the inside, along with vegetables like cucumber, lettuce and chillies. The cooked meat will also have traces of the sweet onion oil flavour to it. Remember to add your passport size picture to the long glass table that has all tourists doing the same. 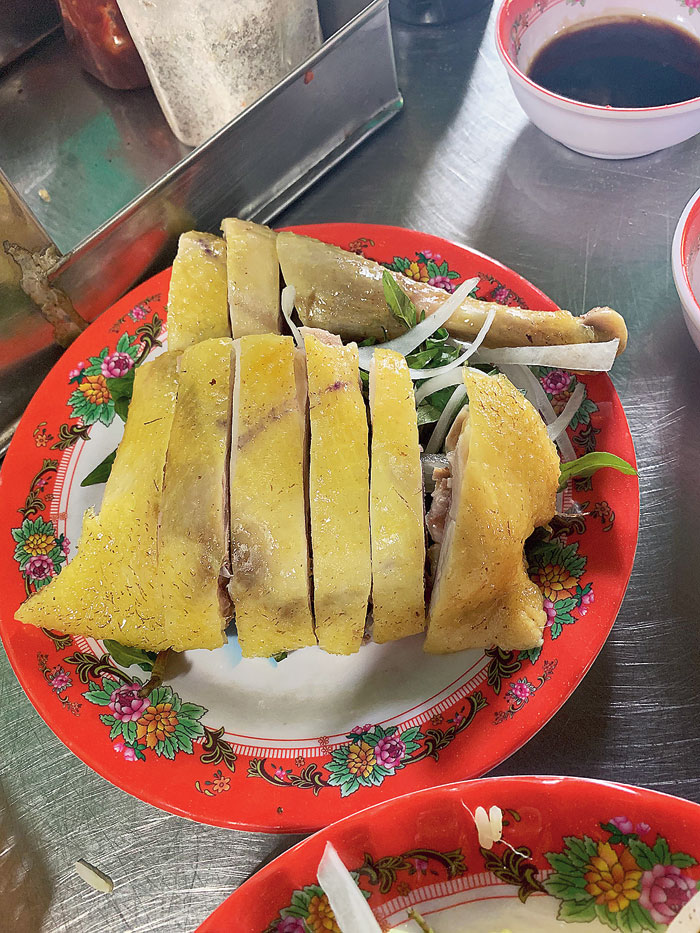 Com Ga Ba Buoi is a place made famous for grandmother Buoi. Chicken rice and chicken grilled on the side with onions are the only two dishes served here. The lost glory of the place is perhaps justified when talking about the chicken, however, the chicken rice dish was soft, flavourful and healthy of course. What we did pleasantly discovered was mixing lemon, pepper and salt with soy sauce creates a dip that goes with any fried dish one would want to serve. Available in packaged bottles, the lemon, salt and pepper mix should be a must in your shopping bag when you leave the country. 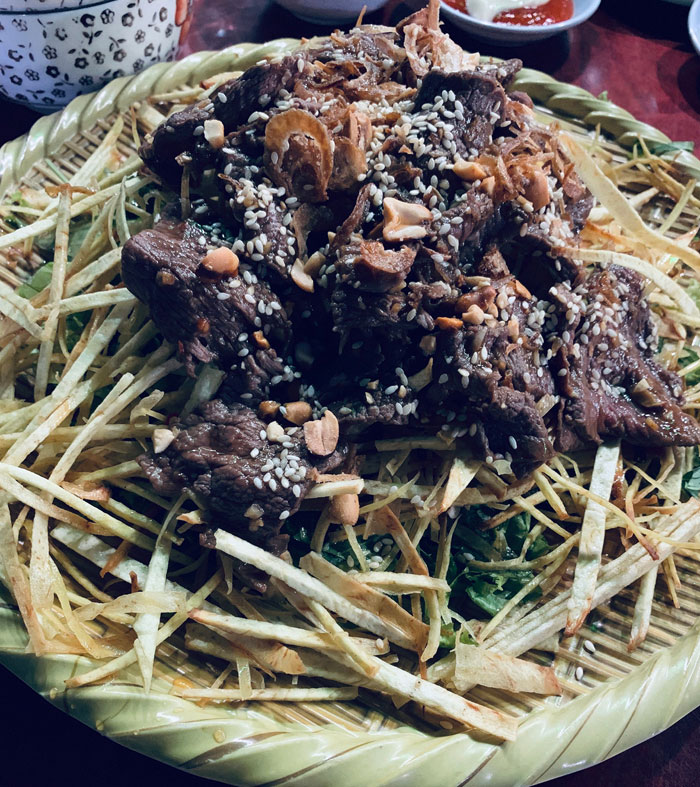 When in Ho Chi Minh City, drop by at Ngon 138 Restaurant, very close to the War Remnants Museum. Expect a lavish menu as the place serves as a hotbed for tourists. However, the best and most authentic meals I experienced here was in a village in Long Thanh, an hour and a half away from the main city. One important lesson learnt — bitterness is a taste that deserves attention. Fish ball soup is served on fire with herbs and bitter gourd on the side. One is expected to boil the soup further after putting bitter gourd in it (quantity depending on taste) and then have it, thereby celebrating a taste that is looked down upon, more often than not.