Five inspiring women and their stories at Tejaswini

Subhaprasanna Bhattacharjee, Jawhar Sircar and Tanusree Shankar were the special guests for the evening

Tejaswini partnered by The Telegraph held at ICCR on February 2 was a celebration of women power and the inner strength present in each and every woman. Organised and produced by Sangeeti, an organisation that aims to promote art and culture, the evening started off with a musical performance named ‘Thakur Barir Andarmahal’ by the members of Sangeeti. This was followed by the felicitation of five women achievers who live up to the essence of ‘Tejaswini’.

Subhaprasanna Bhattacharjee, Jawhar Sircar and Tanusree Shankar were the special guests for the evening and felicitated the five women, followed by the launch of the book Dubai Heights by Aditi Chakraborty. The night ended with a powerful and moving dance drama based on five women from Indian mythology, which highlighted not only the pain and the suffering of these women but also their indomitable spirit which led them to fight back. “With Tejaswini we wanted to showcase the power each woman holds inside her and appreciate this power in the modern day world. This is an annual event by Sangeeti and is in its seventh year. Every year we try to do something new and this year the theme was womanhood,” said Sreyashi Mitra, director, Sangeeti.

1

The musical performance highlighted the role played by the significant women in Tagore’s life, like Kadambari Devi who was not only his inspiration but also a friend and guide. A narration in the form of poetry accompanied the songs, which delved into the place of women in the society in those times and how Tagore viewed the same. All the songs were popular Rabindrasangeet like Gharete bhromor elo gunguniye, Jiboner dhrubotara and Je chhilo amar swaponocharini.
Sudarshan Basak 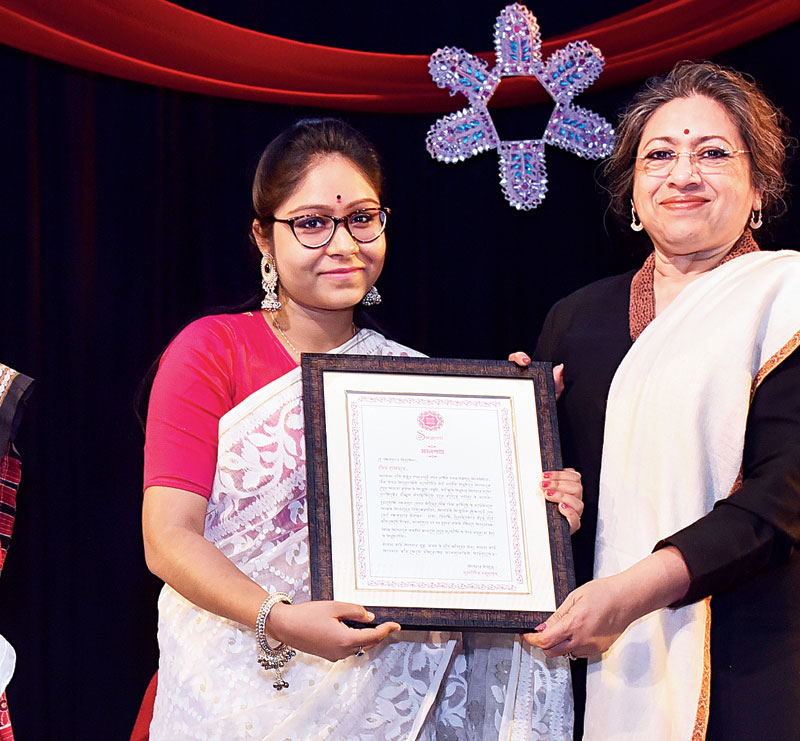 2

Iman Haldar, an upcoming Rabindrasangeet singer, is currently an artiste at the All India Radio and has also received a national scholarship from the ministry of culture, government of India. “I am really grateful to the team of Sangeeti for this award. It is not often that upcoming artistes are recognised and therefore this support and recognition means a lot,” said Haldar.
Sudarshan Basak

3

Dubai Heights a book by Aditi Chakraborty that deals with the lives and the story of four ordinary expat women who live in Dubai and the tussle and conflict between there personal and professional spheres. Jawhar Sircar, Tanusree Shankar, Aditi Chakraborty, and Sreyashi Mitra at the book launch.
The Telegraph 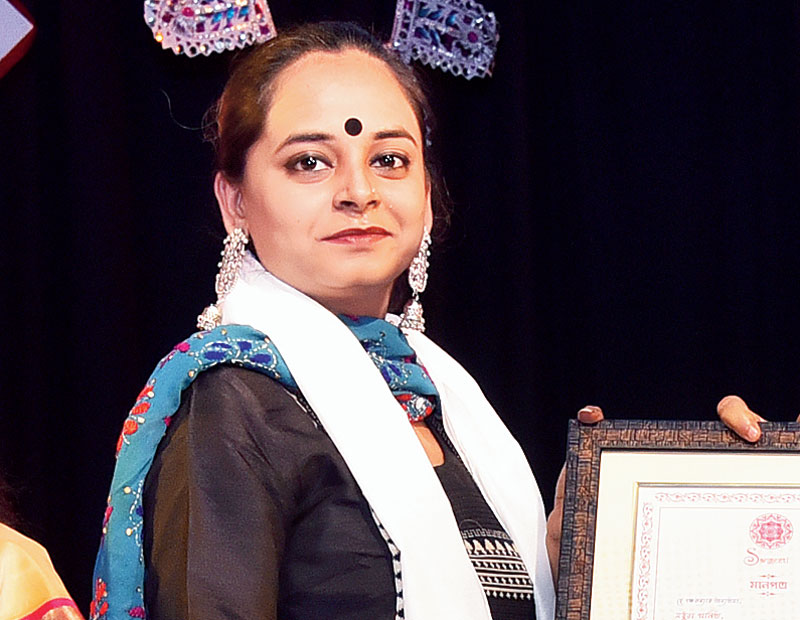 4

Cinematographer Modhura Palit created history by becoming the first Indian to receive the Angenieux Encouragement Award at the Cannes Film Festival 2019. Breaking into a male-dominated industry, she has managed to create her own space. “Tejaswini for me is the immense power that a woman has inside her. Irrespective of any profession, I feel that all women are powerful. There are many powerful women who are working and achieving so much but the spotlight is never on them. Tejaswini is doing a commendable job by bringing such individuals to prominence for everyone to see,” said Palit.
Sudarshan Basak 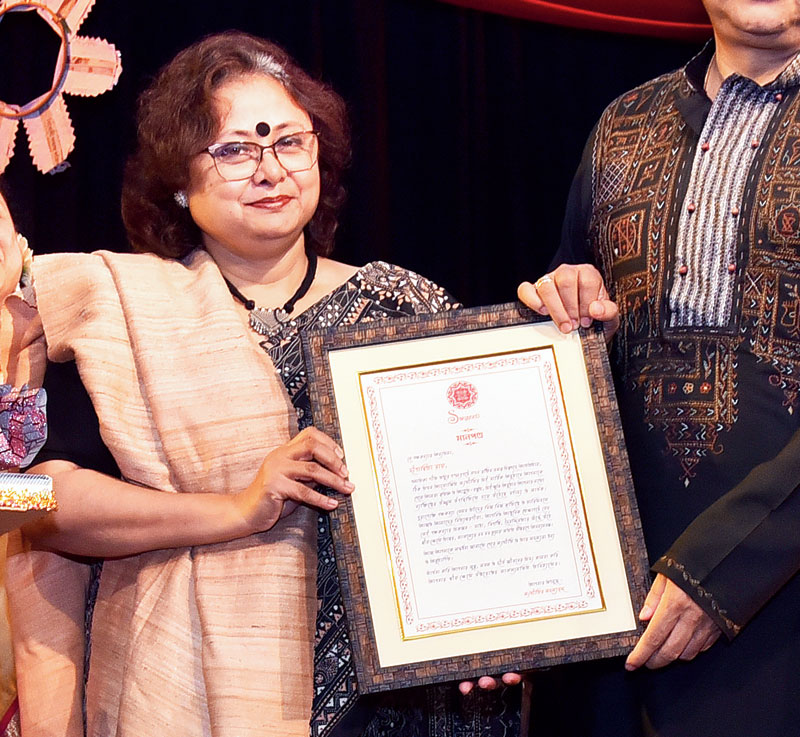 5

Dipanwita Roy writes children’s stories and is also a journalist. “Tejaswini to me refers to a woman who is brave, free and can take concrete steps. After listening to the stories of the other women who were awarded, I feel that the event lives upto the essence of its name. In my stories for children I have always tried to portray positive values and to imbibe the same in children. I wish through my stories children become courageous and differentiate right from wrong,” said Roy.
Sudarshan Basak 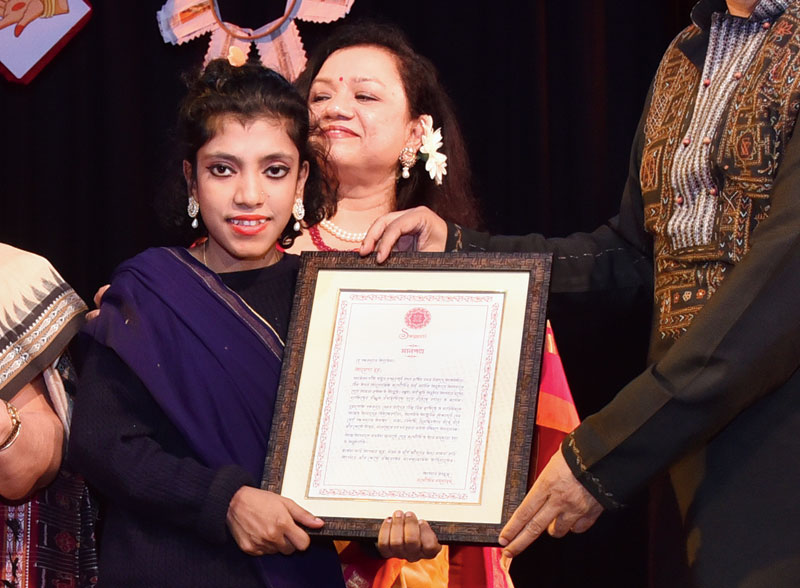 6

Ayesha Noor is a 20-year-old karate champion who suffers from epilepsy, but that doesn’t come in the way of her spirit. She lost her father when she was really young, and her mother had to make ends meet by sewing clothes from home. Despite such odds, Ayesha still managed to hone her skills while being an inspiration to many. After winning gold in Bangkok World Meet among other awards, she now teaches karate to young girls in slums as a method of self-defense, and she does so free of cost.
Sudarshan Basak 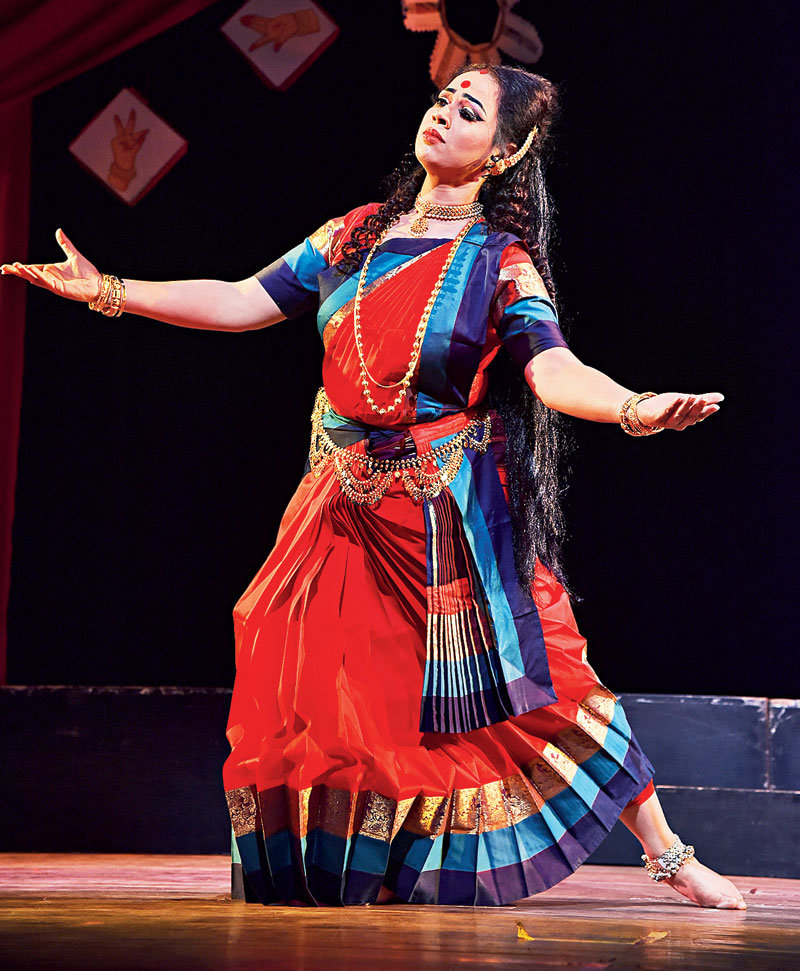 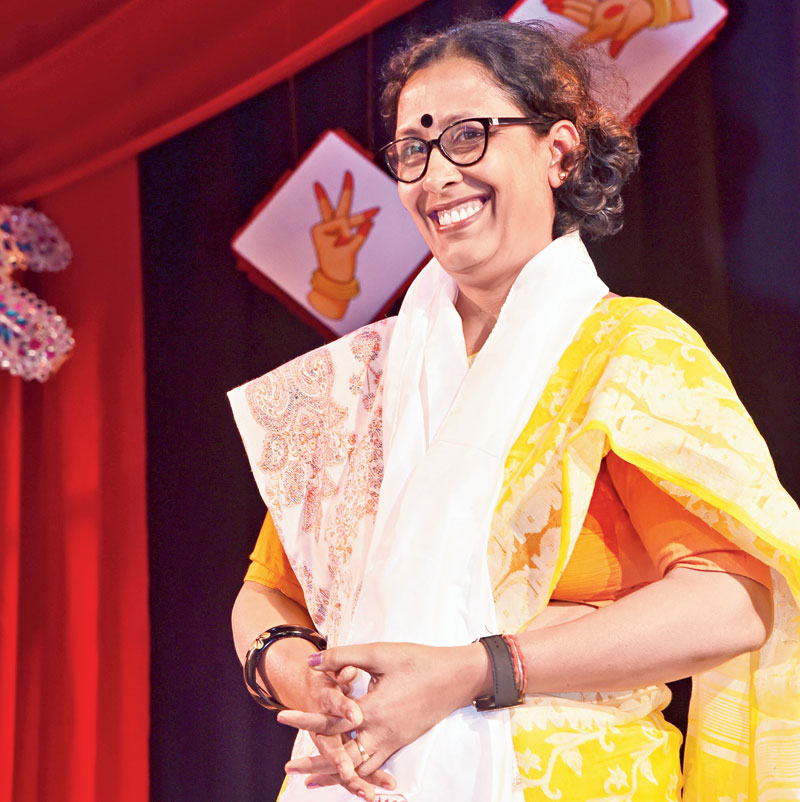 8

Sutapa Roy was one of the first women in Calcutta who filed a case against workplace sexual harassment. Sutapa was harassed by her senior and on protesting against the same she was sacked from her job. Along with the support of some NGOs, Sutapa fought her battle and won, when the company formally apologised for the same. “This battle isn’t just mine. It is of all the women who have to go through the same harassment when they work or travel on a daily basis. Courage, self-confidence and inner strength helped me win this fight; this is what every woman needs,” said Roy.
Sudarshan Basak
Children's Fiction Tanusree Shankar International Women's Day
Share
Advertisement
Advertisement