Students of Kalamandalam Goutam at Behala Natyalok, in collaboration with a bunch of artists, actualised an unfinished project of their guru in the form of a dance drama titled Raja — The Formless King, aided by the ministry of culture, government of India. The play staged at the Open Air Theatre of Satyajit Ray Film and Television Institute recently was a stylised rendition of The Mahabharata centred around Draupadi’s evolution from Kurukshetra to Mahaprasthan.

Kathakali was the chosen medium. A strong advocate of woman empowerment, Kalamandalam Goutam envisioned this Kathakali theatre production as a gallant enunciation of a woman’s voice breaking out from the milieu of patriarchy. Through a runtime of three hours, the play captures a time after the battle is over and Draupadi reminiscing the course of it. Would things have been different had she rejected her cloth and adorned shame, a portmanteau of bravado and sacrifice?

While Banani Chakraborty was Prakshana, Adreeta Chatterjee was Draupadi and Ekavali Khanna Yuvati. Kalamandalam Sucheendranathan, Jayeeta Ghosh Raha and many artistes from West Bengal and Kerala collaborated. Dinesh Poddar took care of lights and Jaydeep Sinha vocals. Kabir Bedi lent his voice for the narration while Debojyoti Mishra curated the soundscape. The Telegraph was in the audience. 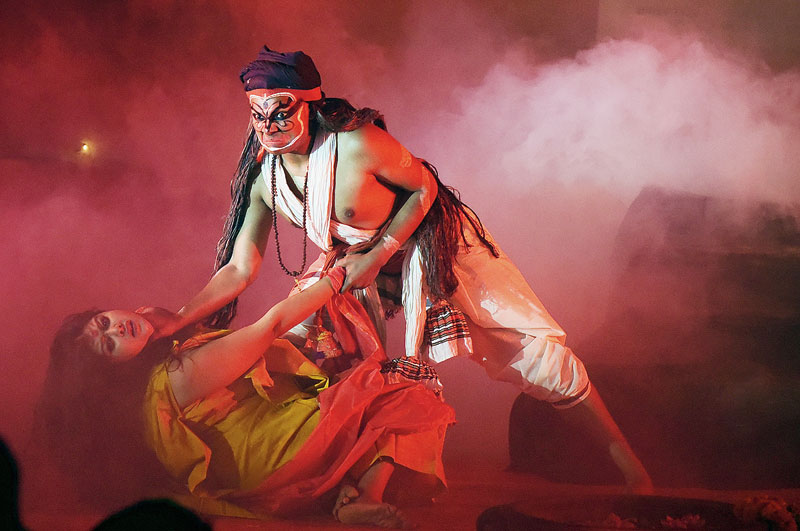 1

“The production foregrounds this one point in the plot where Draupadi rejects cloth and she wants to wear shame. When my guru conceptualised this production in 2012, I has a long conversation with him. He wanted to do The Mahabharata and this was his take on the epic where he wanted to say that Draupadi was treated like a commodity in the main narrative to quench the lust for power in a struggle for power and had Draupadi rejected her cloth at that time, we wouldn’t see this kind of oppression in society today. It is also based on Rabindranath Tagore’s poem Agomon. In our guru-shishya tradition, if the guru passes away, it’s the duty of his disciples to uphold his form and principle. That is what we have tried to do,” said Dibyendu Tarafder, seniormost disciple of the late Kalamandalam, who played the role of Yudhishthira.
B. Halder 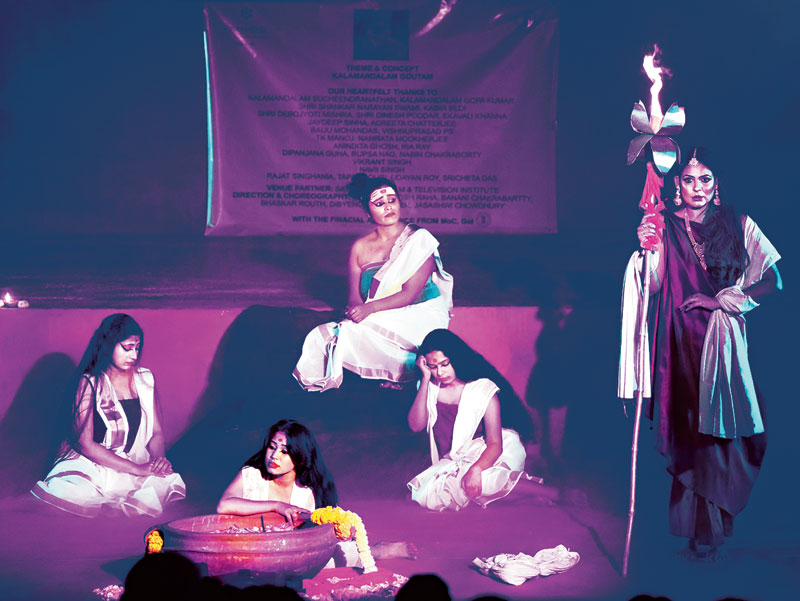 2

For Ekavali Khanna (right) this was a chance to experiment. “After Rajada passed away, I was told that he had envisioned me in this role. He was looking for someone who had an Indian face, long hair and a calm voice... those were his words. He was looking for a strong independent woman to play the role. For me, it was a bit about honouring his last wish and an opportunity to reinvent myself,” she said. She found Draupadi more interesting. “I tried to decode her thought process, her way of life and also to contemporise her. I felt I must also relate it to women today, which is very much possible. There is still so much of violence,” she said.
B. Halder 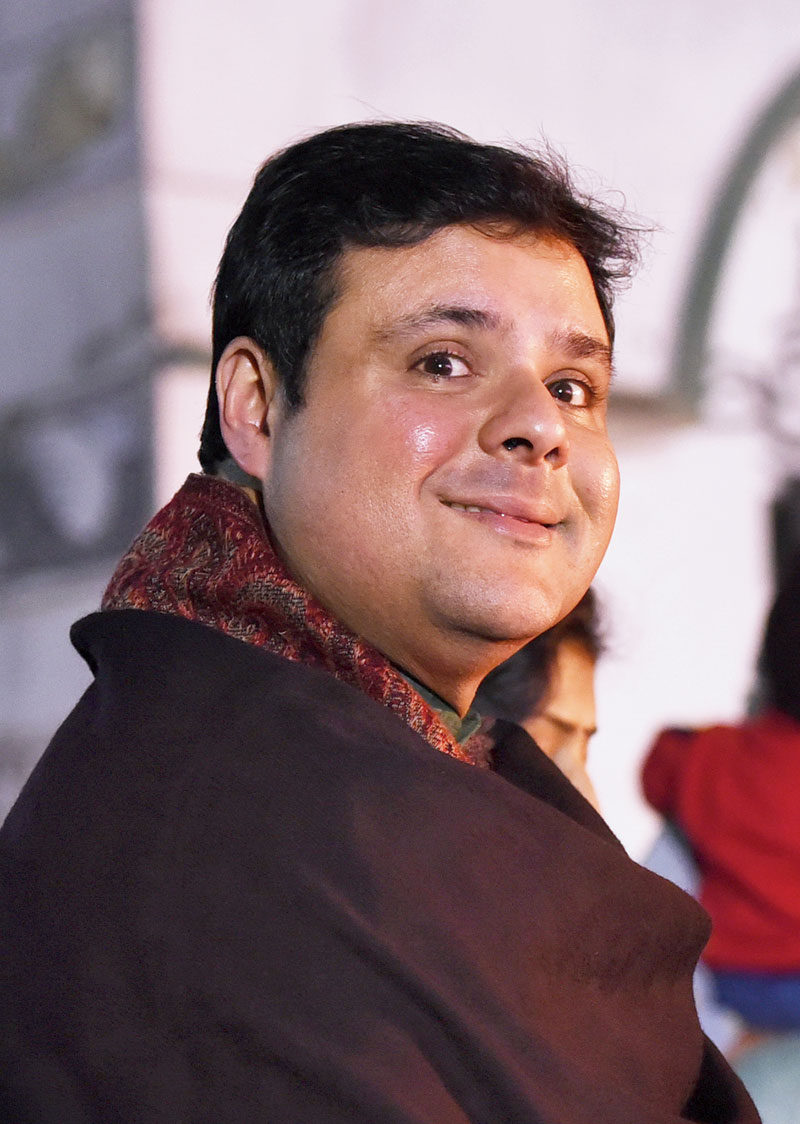 3

“There is this play called The King of the Dark Chamber by Rabindranath Tagore. Rabindranath’s Raja. In that play, the king is tied with an allegory of our soul that’s submerged in darkness. A similar thought also reflects in this story of The Mahabharata that Raja — The Formless King built up. So there was a kind of integration happening between Tagore’s philosophy and the portion of Mahabharata that was staged,” said multidisciplinary artist Sujoy Prosad Chatterjee.
B. Halder 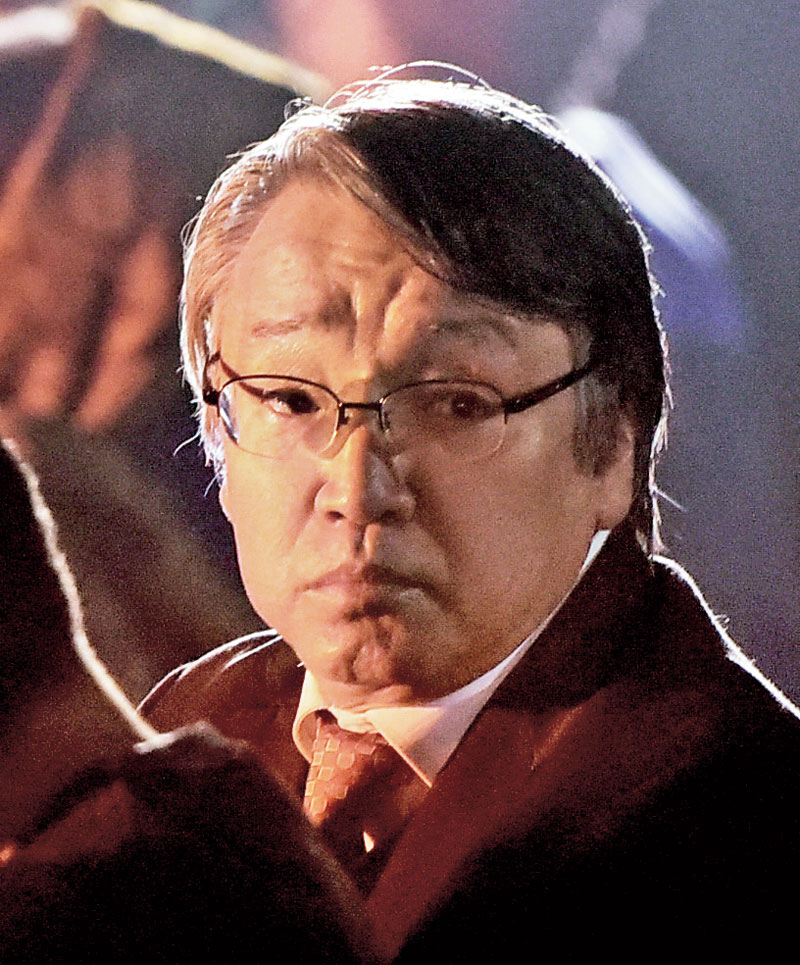